The ancient roots of mentoring 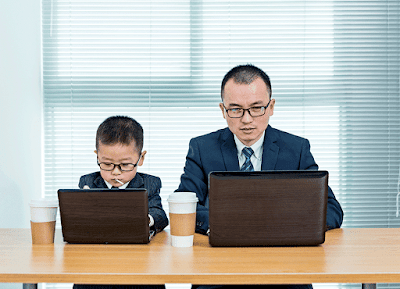 The idea of an older person helping in the development of a younger person is an ancient pattern seen across many cultures.

In warrior societies and castes such as among the Japanese samurai and the European feudal knights there would be an 'apprenticeship' stage. Among the Maasai there are the morans - living apart from their families in the bush, learning the wisdom of the elders and strengthening themselves physically and spiritually.

The ancient pattern is that a son learns the trade of his father by being next to him, day after day, seeing everything he does, working alongside him. That was true in the harvest field (2 Kings 4:18), in trades like carpentry (Matt. 13:55), it was how the Law of Yahweh was to be passed on (Deut. 6:7), it is even seen in the relationship between the eternal Father and Son (John 5:19-20).

Harrison Mungai, founder of iServe Africa, has often pointed to the success of Asian businesses where there is often high intergenerational family commitment, continuity and stability. Behind the counter (so to speak) there is often a 70 year old patriarch or sometimes matriarch, the 40 year old son/daughter and the 10 year old child.

In Medieval Europe this form of learning was formalised in apprenticeships (usually from age 12 to 21) into a trade guild. But outside those trades most life skills and work was learnt through familial relationships until the mid nineteenth century when the industrial revolution shifted work outside the home. (It will be interesting to see how the Covid-19 UK lockdown, which has increased home working from 30% to 60% might play into intergenerational learning/working.)

The term ‘mentor’ came into English when ‎François Fénelon's Les Aventures de Télémaque were translated in the early 18th century. Fenelon uses some of Homer's setting and characters (King Odysseus, off to fight the Trojan War, has entrusted his son Telemachus to the care of a loyal old friend named Mentor) to make points about contemporary (late 17th century French) politics and education. But there are a number of ways in which Fénelon picks up on aspects of Mentor's ancient role and expands and develops them into what we now recognise as the role of a mentor.
Someone (I can't find the reference) has noted that (via Fénelon) Mentor’s principal actions in relation to Telemachus were:
What I find particularly interesting here is that mentor is in a sense a surrogate father role (cf. Phil. 2:22 - as a son with a father) and yet the role is focused not on the mentor but on spurring on Telemachus to be the true son of his  true Father and do what his Father would have him do now as he waits for a future fulness of sonship. Isn't that hugely suggestive for Christian discipleship?

Lord, in your mercy, turn the heart of the fathers to the children, and the heart of the children to their fathers. May there be many mentors who point people to the Father through the Son, who give courage to live as children of the King, who encourage groaning for our inheritance, the resurrection day when the sons of God will be revealed in glory and we will feel your thumb wipe every tear from our eyes. Amen

Luke-Acts as a manual for mentoring an Apollos

September 23, 2020
Acts 18:24-26 gives a window into leadership mentoring, a window into an important biblical theme, and perhaps a window into the intended audience and use of Luke-Acts. Mentoring Now a Jew named Apollos, a native of Alexandria, came to Ephesus. He was a learned man, able in the Scriptures. He had been instructed in the way of the Lord. And being fervent in [the] spirit, he spoke and taught accurately the things concerning Jesus, though he knew only the baptism of John. (Acts 18:24-25) There is a lot of potential here. He knows his Bible He’s been catechised in the way of Christ He is fervent – literally boiling – passionate, fearless, committed, all in  H e does a good job of teaching people Jesus That is a hugely promising profile. That’s the sort of profile of knowledge, heart and ministry instinct we need to be looking for to encourage into church leadership. He's not previously know to the disciples in Ephesus. He's just arrived from northern Africa. But he&
Post a Comment
Read more